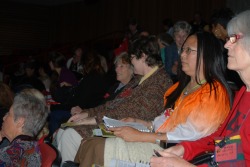 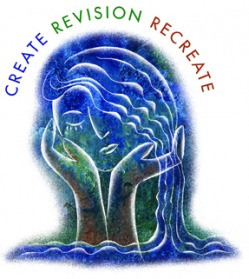 ​Monterey Bay, Northern California, Peninsula, South Bay and Southern California chapters hosted regional chapter members and the WCA board at the Pacific Region Conference in the San Francisco Bay Area from June 23 – 27, 2010. The theme was eco- and all of the activities were planned with a “green” focus and an emphasis on recycling and sustainability.

The long weekend started with a bus tour of businesses and artists that recycle or use recycled materials. At Recology, the group toured San Francisco’s waste disposal site and talked with Val Britton, an artist just starting her residency there. The tour also included visits to artist studios at Hunters Point and SOMA, where attendees had opportunities to view artwork and meet the artists. The artists included in the tour were Marc Ellen Hamel and Dolores Gray at Hunters Point and Liz Mamorsky in SOMA.

The Blue Planet exhibition featured eco-art juried by Southern California artist, Kim Abeles. 123 artists submitted nearly 300 pieces, of which works of 56 artists were selected. The closing reception at Somarts was filled to capacity and we were honored to have Kim Abeles’ attendance as well as many artists selected for the show.

Following the Regional Conference, the WCA board held an Executive Committee meeting, met with local chapter members for a lively discussion about the future of WCA, and held its summer Board Meeting.

Seed money ranging from $400 to $700 was donated by each of the participating chapters to launch the Elements Conference and events. The total expenses for the conference, exhibition and bus tour were $9,826.10. The total income for the conference was $2,693.90. Each chapter will receive a return of their seed money and a tiny profit, in proportion to the amount of seed money invested. Our chapter receives a return of $725.28, which represents seed money of $700 and $25.28 profit. Our goal was to break even, and we met that goal.

The chapter members that participated in these ambitious events have learned much about putting together a conference and have developed closer cross-regional relationships. This project was a wonderful opportunity for capacity-building within WCA.
Powered by