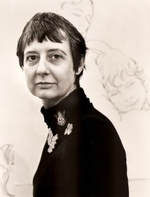 Exemplary artist, founding member of WCA, pioneering feminist activist and dedicated teacher Eleanor Dickinson passed away peacefully on February 25, 2017 at the age of 86. She will be forever remembered for her vivid drawings of the human form, often in extreme perspective and rendered in all their glory on a background of deep black velvet.
Dickinson sympathetically depicted the mysteries of religious fervor that she observed at gatherings of snake handlers and bible meetings in the Deep South, her homeland. Taking on the gender inequities of the art world, Dickinson devoted much time to gathering statistics on women’s participation and inclusion in art exhibitions.  She believed that a straightforward statement of facts would be the most damning and indisputable proof of prejudice against female artists. These statistics were used to great effect at the West Coast Guerrilla Girls'  activist happenings. Dickinson never abandoned her quest for gender equality  in the arts and was a driving member of the Women's Caucus for Art for many decades.
As a master teacher of figure drawing at the California College of Arts and Crafts (now California College of the Arts) Dickinson influenced generations of artists with her methodology of truly seeing and measuring her subjects for accurate depiction. She was one of the few artists who encouraged models to talk while posing, as she believed it was an artist’s duty to render the inner psychological landscape  as well as the physical corporal body. Her sketchbook, unique vision and sensitive renderings were always nearby and part of her essential being.
Eleanor Dickinson's generosity and valiant efforts will never be forgotten by all feminists and artists who follow in her footsteps.
For more information about Eleanor Dickinson, please visit this website: ​http://eleanordickinsonart.com/

Long-time NCWCA member Barbara DiNucci Hendrickson passed away on October 17, 2015. She served on the chapter board for many years and held a key role in designing our first website. She mined her Italian family genealogy in her paintings and photo montages, incorporating current and historical family images and stories. Barbara earned an MA in English from California State University at Hayward and created one of the first Women's Studies classes at the university. Shortly after receiving her MA, she began teaching English at Ohlone College, where she was a founding faculty member. Later, she attended San Jose State University and earned her second MA in Art. She became an accomplished artist and her works appeared in art shows throughout the Bay Area.   She was a lifelong feminist and is survived by her second husband, Christopher Hendrickson; children Rachel Shelton and Gilbert Hofacker Jr.; step-daughters Elizabeth and Donna Hendrickson, Jennifer Ricci, and Jenny Welham; and seven grandchildren. 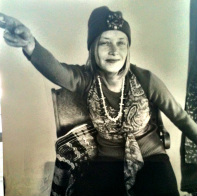 Patricia Tavenner, a founding member of WCA, passed away on May 10,
2013 in Oakland, California. In the 1960's, Tavenner moved from Michigan
to Northern California and pursued graduate studies at the California
College of Arts & Crafts and University of California, Berkeley. She was an
early participant in the formation of WCA, organizing pickets at museums
in the San Francisco Bay Area and helping to found the Northern California
Women's Caucus for Art in 1972. Tavenner was a photo silkscreen artist, a
member of the Bay Area Dadaist scene and a well-known mail artist. She
defined mail art as anything that comes through the mail, a medium that
sidesteps the restrictions of traditional art categories and allows anyone to
be an artist. An active member of the counterculture, Tavenner wrote and
published a zine called Mail Order Art in the early 70's and taught classes on "the secret history of women artists." She was also a long-time instructor of art at UC Berkeley Extension. Tavenner discovered artistamps while searching for new media. She found a shop in Philadelphia that transferred images into a sheet of gummed and perforated photostamps. She was enchanted by the beautiful sheets of stamps that arrived in the mail. As an artistamp artist she earned the moniker, "Mail Queen" and was involved in a network of artists who traded stamps as children did with baseball cards. Tavenner curated the First California Artistamp Exhibition at UC Berkeley in 1995. Her artistamps were exhibited at the Davidson Gallery in Seattle (1989), Sonoma County Museum (2003), Budapest International Artistamp Show (2006) and featured in books about artistamps.

Our beloved member and President Emerita, Rusty Cantor passed away at home on March 13, surrounded by family and friends from NCWCA. Rusty was a leader of our chapter for many years and, as quoted by Eleanor Dickinson, "She had quite a life, loved by most, angered by a lot, starting a lot of issues and causes." She was unabashedly feminist, a  strong voice against censorship, and advocate for women's works to be represented in galleries.
Margot Comstock wrote a press release for Rusty a few years back. To read about Rusty and see her work, click here.
Powered by