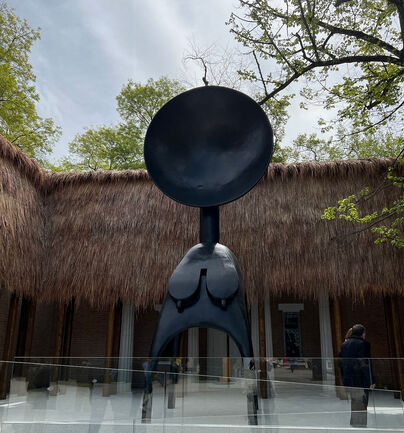 Simone Leigh, Satellite, 2022, Bronze, 24 feet × 10 feet × 7 feet 7 inches
Courtesy the artist and Matthew Marks Gallery © Simone Leigh Photo: Deanna Sirlin
Much is at stake these days over how American history gets written. In 2019 The New York Times published MacArthur Genius Award recipient Nikole Hannah-Jones’ The 1619 Project, which shifts the nation’s origin date from 1776 to 1619, when African slaves were first brought to American soil. The 1619 Project additionally impugns prevailing hagiographies of patriots who fought for independence while conveniently leaving out how many of them, including Thomas Jefferson, owned and abused slaves. The architecture of the U.S. Pavilion in Venice’s Giardini reifies such narratives. Built in the 1930s to recall Jefferson’s Monticello house, the U.S. Pavilion was designed in the neoclassical Palladian style familiar to Venetians.
​
The inimical implications of the U.S. Pavilion’s status as a cultural representation have not been lost on Simone Leigh, the first Black woman artist selected as the U.S. Venice Biennale representative. Protesting white supremacist cultural amnesia, Leigh fortifies herself with Black feminist theory and methodologies. Citing scholar Saidiya Hartman’s use of “critical fabulations,” Leigh transformed the U.S. Pavilion deploying aesthetic strategies that foreground what Jill Medvedow, the co-commissioner of the U.S. Pavilion, described during her introductory remarks at the exhibition preview as “adjacency” – that is, the adding, subtracting, rearranging, juxtaposing, and fusing together historical, mythical, and reclaimed imagery across geographies and historical periods. Leigh probes historical, ethnographic, and popular culture archives to critically re-examine the past. In so doing, she calls attention to Black femme subjectivities while safeguarding Black women’s autonomy, particularly with regard to their private thoughts, sentiments, and sexualities. [CLICK FOR FULL ARTICLE]
Powered by